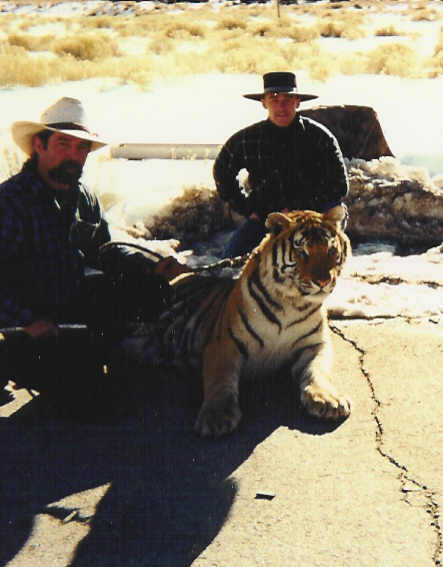 I was not comfortable around the tiger.  To say otherwise would be a lie, and it is evident in the photo.  I’m sitting a respectable distance back, with a strange, indecisive grin on my face.  Much like a Great White shark, a full grown Bengal tiger does not have eyes that are inviting of trust and appreciation.  Plus, it’s a cat, a hungry one no doubt, and hungry cats are a known quantity of deception.  But I couldn’t resist getting in on a photo.

The tiger had been residing in a two horse open trailer in the parking lot of Soper’s Casino, walled off from a terrified colt by sheets of plywood.  When we pulled into the lot, a slush and mud concoction that citizens of Deadwood would have recognized, I walked over innocently to look at the horse.  Then I saw the tiger, jumped two feet in the air, felt the grab of unadulterated terror, and premium outback shock.  And what is the outback?  That good country where all things are not just possible, they often happen, sometimes with legendary flair.

Thirty minutes before discovering the tiger I was feeding out cows from an old flatbed Studebaker I managed by virtue of starting fluid, a stream of cussing, and baling twine knotted around the steering wheel–because I was on the back, flying by wire and kicking off bales to cows covered in ice at 10 mph–and when that chore was finished my grandfather and I drove to the top of Montgomery Pass to have breakfast at Soper’s Casino.

Soper’s no longer exists, except in my memory, as a wind-raked (elevation 7,167) truck stop and casino where I played 21 on day-work pay, and watched, one summer afternoon, on a barstool, OJ Simpson’s famous pursuit on the LA freeway system.  It is now, like much of Nevada, fired, crumbling, ransacked, and returning to the earth.

But it reminds me of a country I hope we never lose.  There is a lot happening in the Modern West, there always is, and some of it–where we allow it–still resembles that land of limitless opportunity for the strange and unruly that once existed in our beloved Old West.  There’s the Bundy thing, for certain–which has the stigma of unfortunate and enduring seriousness–there is Burning Man, which exists on the opposite end of the spectrum, and there are still cowboys and rangers and bandits and shopkeepers.  But I have a growing fear that that the brackets are closing in precipitously, that we are in danger of losing forever that openness and even recklessness which once defined us.

I think we might lament one day, privately or in print, losing our sense of utter outback, of the pure, or intentionally, crazy, our ability to enjoy the eccentrics and the far-outs who live on the dead frontier.  Each passing year we grow closer to completely assimilating and mainstreaming a wild country that hosted any number of opportunities for the bizarre, the original, and the unimpeded.

We have seen it changing, as we ourselves have changed, pinched perhaps by the pressures of modern life to conform into a largely homogenous–and subsequently uninteresting–brand of the species.  We make gatherings to celebrate those things that define us even as we are losing them.  Particularly because we are losing them.  I’m reminded of the ghost dance, born not far from where I was raised, and those desperate attempts to simply dance back into existence a dying life we once enjoyed.  And we know how that ended.

Still, I sing lamentations for what we might lose, and I am angry that the best I can do is concoct a kind of modern day ghost dance, in pathetic paragraphs, against the tide of rigid and boring comfort that is becoming our shared experience.

Down the road from my grandfather’s place was a perfectly legal Nevada brothel–Janey’s Ranch.  The hookers from Janey’s used to meet us at the top of Montgomery Pass in the fall, when we herded cattle home from the Basalt Range.  They would gather with platters of food and drink on the highway outside of Soper’s Casino, hoisting trays of margaritas and limes, brilliant in whatever revealing outfit best kept them warm in the wind, smothering the cowboys with smiles and best wishes, laughs, and bad jokes.  They were having a lot of fun, and so were we, while the cows bawled and mothered up with their calves in bad skies and spitting snow.  And that was the sum total of the contract.  I’m not sure anything of its kind exists anywhere else, or ever will again, but it was modern then and it was real and it was precisely the unbridled outback I love the most.

Today, Janey’s is also gone.  The old sign on the highway–made from a gigantic boiler tipped on its side and painted silver–reads, in black paint: “Janey’s Ranch…closed.  Beat it.”  Still a message worthy of the plain-spoken west.

And what about the tiger?  Three months after my grandfather and I ran into this tiger, it mauled to death the man who knelt beside me in the photograph.  I know that because my grandfather sent me, by US Mail–the way we used to do–a newspaper clipping reporting the event.  In the margins my grandfather had scribbled, “Told you so.”