I am of the opinion that men should wear hats, and I’ve been needing a new one, which has caused me to think about hats and headgear much more than I normally would, and perhaps even more than is appropriate, given the number of unattended items piling up on my desk and elsewhere on the rancho.

I’ve worn a hat for as long as I can remember.  Ballcaps, cowboy hats, and for a while I sported a desert fedora, which now, much abused, has been converted into my fly-fishing rig.  Wearing a hat probably does not make me, or anyone else, a better human being, but in general it seems that the trend toward grown men running around uncovered has coincided with the collapse of serious manhood and grown up behavior.  That’s bold, but I would argue that these issues are linked.  Where one line on the graph goes up, the other goes correspondingly down.

A field of hats, in the valley of manners

Speaking of hats, the good people over at the Zapatopi Skunkworks have been doing some excellent research and development in the field of tinfoil hats.  Sometimes its helpful to look at the whole hat conundrum with a fresh set of eyes, and they have certainly provided us an alternative view.  Spend some time perusing the site.  You will learn how to build your own AFDB (Aluminum Foil Deflector Beanie), some use and maintenance tips, and the site also includes an excellent academic treatise in response to a Massachusetts Institute of Technology anti-AFDB study. 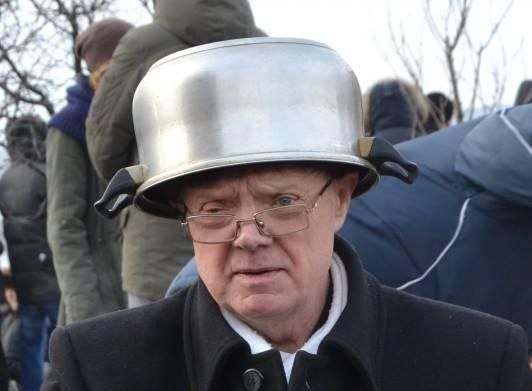 A proper hat is a highly personal choice, and a reflection of our soul

These days I have reverted to daily wear of my buckaroo hat, which for the uninitiated is a flat brim with a telescope crease.  Straw or felt.  And last friday, because my old felts are beginning to fall apart, I went over to Gene Baldwin, of Baldwin Hats, and got fitted for a custom job.  This was my first experience with the conformateur, which is a strange device Gene sticks on your head to determine its actual size and shape.  I’m happy to report that I do not have any irregular buboes, bumps, lumps, or knots, and that a grand new felt will be mine in a few weeks.  Gene reports that he is very busy building Longmire lids, after the success of the television show, and a sudden inexplicable crush of midwestern bankers who simply must adopt the look.

Over the years I’ve endured a lot of grief over my preference for a buckaroo lid, but I earned the right to wear one, and so I do, even if the Texans, who have gone all in for that taco-shaped contrivance they call a hat, can’t quite come around to the natural shape and beauty of an actual working cowboy’s kit.  In the long view, it’s probably better that they stick with those strangely mashed-up wicker baskets they wear, since it makes distinguishing them from afar so easy.

I’m kidding, of course.  I couldn’t care less about the shape of a man’s hat, or what material it is made from, so long as he is wearing one.

There is an entire sub-genre of this hat business, which is in the area of helmets.  From unwieldy roman parade helms to the infamous pickelhaube, but I don’t have time to get into all of that.  Jim Cornelius tells me that he has finished a new song, and I’m on my way down to the office to give it a listen.  That’s a distinct privilege, of course, so I will wear my very best hat for the occasion.