A View from the Diablos, across the Sonoyta Valley, to Old Mexico

I am back.  I have officially returned to base.  I did not have the opportunity to dash off as many dispatches as I had hoped, due to various time constraints, a shaky wi-fi connection, and general end of the day fatigue.  I did not repeat the Jameson’s mistake, believe me, because the following morning I suffered mightily for that pratfall, shoveling buckets of rock and sand out of an old ranch well.

But I would like to give you some sort of After Action, something useful that you can take away.  It isn’t easy.  I spent yesterday writing three separate articles for the Nugget News, and I still have a larger piece to write, and these posts, and the hardest work is distilling the experience on our border into something that resonates, is fair, and asks the right questions.  I might just stick to the facts.

Here are some:  the morning following the Jameson’s incident, we were joined by Park Rangers and caravanned to the base of the Ajo Range, in the eastern portion of the park, whose back side borders the massive Tohono O’Odham reservation.  The Ajo is a brief, spiny, range and a favorite route for smugglers, who are often spotted, if not apprehended, at various lay-up sites and observation posts.

We parked at the Alamo Canyon Campground, then hiked a mile and half east along Alamo Canyon, following a dry wash full of cholla and organ pipe cactus and giant boulders, with towering, three ton saguaro casting thin shadows.  It was hot, likely the hottest day of the trip.

Our mission that morning was to clear brush, at the behest of a park archaeologist, from an old corral that once belonged to the Gray Ranch–another story all by itself–and to dig out a primitive well that had been filled in by a 2012 flash flood down Alamo Canyon.  Each of us had some kind of tool to use, pruning shears or limb saws, and we went straight to work on the brush.  I spent that time with Ryan Lantta, an army veteran from Fresno who was shot six times in the chest in a firefight in Ramadi, Iraq.  Miraculously, his body armor caught all six rounds, but the blunt trauma broke most of his ribs and collapsed his lung.  It is fair enough to say that he has seen the elephant.

We worked well together, and it wasn’t long before we had our portion of the corral cleared out, though I took a few breaks in the shade of an old corrugated tin that was holding up a length of fence–sweating out my penance–and drank enough water to empty Shasta reservoir.

Above us the sheer cliffs of the Ajo Mountains shone in the bright sun, and the sky was cloudless and blue.  The armed Park Service Ranger kept his eyes on those hills, where scouts were watching us, and held his M4 in a constant low-ready.

We broke briefly for lunch.  Mine was an apple and more water, which was all the risk I was willing to take on behalf of my belly and the headache.

Brett Miller, the Warfighter Outfitters founder, and Mike Pence, who had been hit by an RPG in Iraq and seriously wounded, from Creswell, Oregon, had already started on the well and made several feet of progress.  They were stripped down and working furiously, hauling one bucket of sand and rock out of the well at a time.

One of the park rangers had told them they would never hit water. 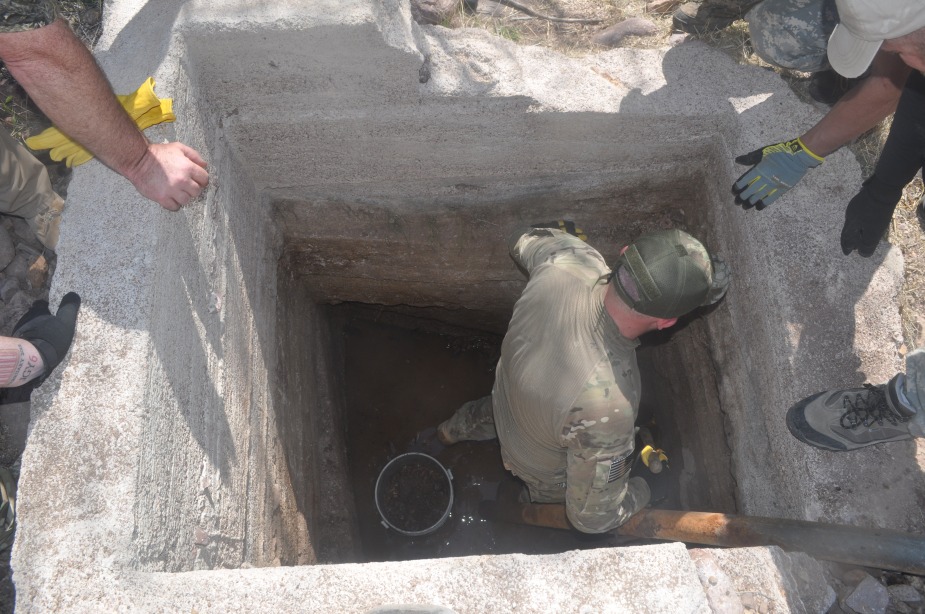 One bucket at a time, Brett Miller down in the hole

I joined in.  The three of us worked in five minute shifts, filling buckets, hauling them out, telling jokes, and before long all of us were there, some of us pretended to be working, others didn’t even bother to pretend, but enjoyed the camaraderie anyway.

And then it happened.  We struck water.  It didn’t bubble up, but it started seeping, rapidly, until there was almost a foot of water–and still growing–at the bottom.

Mike, who had taken off his boots and socks and was still working in the bottom, hollered mightily into the Ajo Range:  “You’re welcome!”  It echoed off into the canyon and we all laughed, because we all knew that although we were doing this for the Park Service, the ultimate benefit would be enjoyed most by the traffickers.

But there is a flip side.  Though they wouldn’t admit it openly, the Park Rangers hinted that they would place seismic sensors near the well, and use them for their own purposes.

I think this tale of well-digging and sensors, and the sure knowledge that we were being watched, and that somewhere up above us there was undoubtedly a conversation about how stupid we were to be digging out a well in the middle of the day, does a fair job of summarizing the borderland experience.

That night we were hosted by the Ajo, Arizona, Elks Club.  After a shower and a much needed nap, we arrived at the Elks and enjoyed a fabulous family style dinner, met some new people, made some new friends, then returned the La Siesta for a late night dip in the hot tub.

Did you see that?  Park Service LEO’s with FLIR at the OP

Next morning early, we joined with three Park Service Rangers, loaded for bear, and occupied an observation post in the Diablo Mountains, east of Tillotson Peak, and spent several hours scanning the hills with FLIR and Swarovski spotting scopes.  We didn’t see anyone, but they were there.  One of the Rangers pointed out various places in the Ajo’s and the Diablos that he had personally dismantled long-term scout camps, semi-permanent hides with solar panels for recharging cell phones and radios.

And then it was time for us to go.

We made Phoenix with almost no time to spare, rushing the clock because the travel agency had let us know that I had been “flagged” and they were unable to check me in over the computer.  Nobody was sure what that meant, but it was an odd feeling, to be out on the desert, surrounded by invisible smugglers and nefarious beings, thinking that I was on some kind of list of dangerous people.  It turned out fine, in the end, and didn’t mean that, but that is a curious psychological experiment.

That’s all I have for this post.  I’ll be back here tomorrow, with some more thoughts and details, some that I think might blow your mind.  I just wanted to let you all know that we are all home and happy, and that I appreciate very much your comments and for sticking with this humble site.