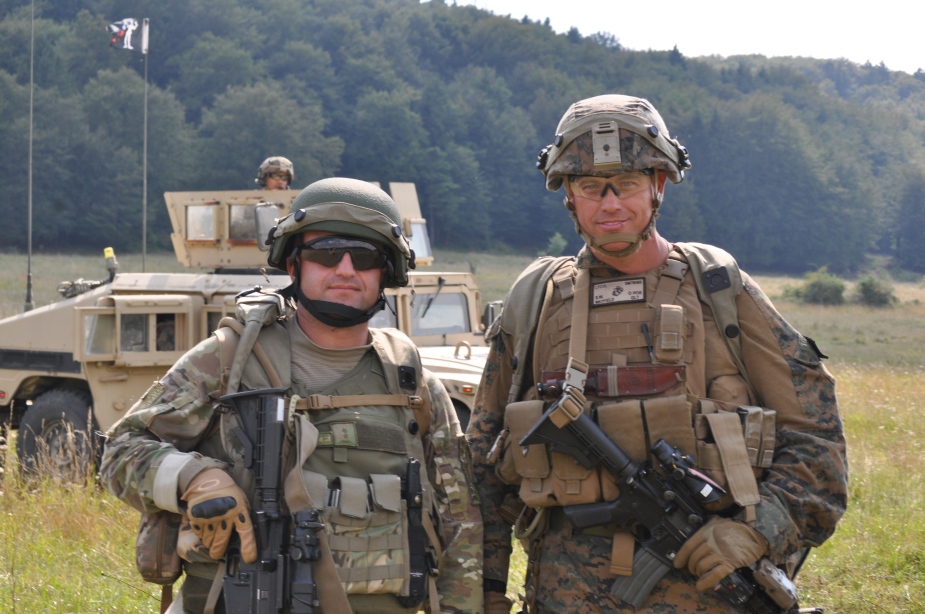 This post originally appeared in The Nugget News, September 13, 2016.  This piece concluded my series from Hohenfels, however I will be adding some fresh afterthoughts here in the BC in the coming days.

JMRC Hohenfels, Germany.  When Russian troops poured through the Roki tunnel in 2008, after months of international legerdemain and carefully stage-managed provocations, Lt. Colonel Romani Sanikidze, of the Georgian Army, was a junior officer. He was also at home on leave, well into his cups, and thought the frantic phone call calling him to duty was a bad joke.

It wasn’t, and it was hardly unexpected, but the world was focused on the Olympics in Beijing, and so this four-day war, during which the Russians seized the provinces of South Ossettia and Abkhazia under dubious pretense, sank the Georgian Navy at anchor in the Black Sea, and came close to seizing the capital city of Tblisi, passed without much notice. And it largely remains that way.

Except to the Georgians.

Freed by the fall of the Soviet Union, the tiny nation of Georgia – with a population slightly less than that of Oregon – turned rapidly and aggressively to the West. They sought to finally control and exploit their own resources, to become a trading hub between East and West, and to join NATO for defense against the designs of their behemoth neighbors.

Imagine Oregon facing off against the rest of the United States.

But the Russians, knowing the rules for entering NATO, and fearing an expanse of this treaty pact into a region they once dominated – often brutally – balked. By invading Georgia, they created a disputed border, and nations with disputed borders don’t get to play with NATO. See Ukraine, 2016. 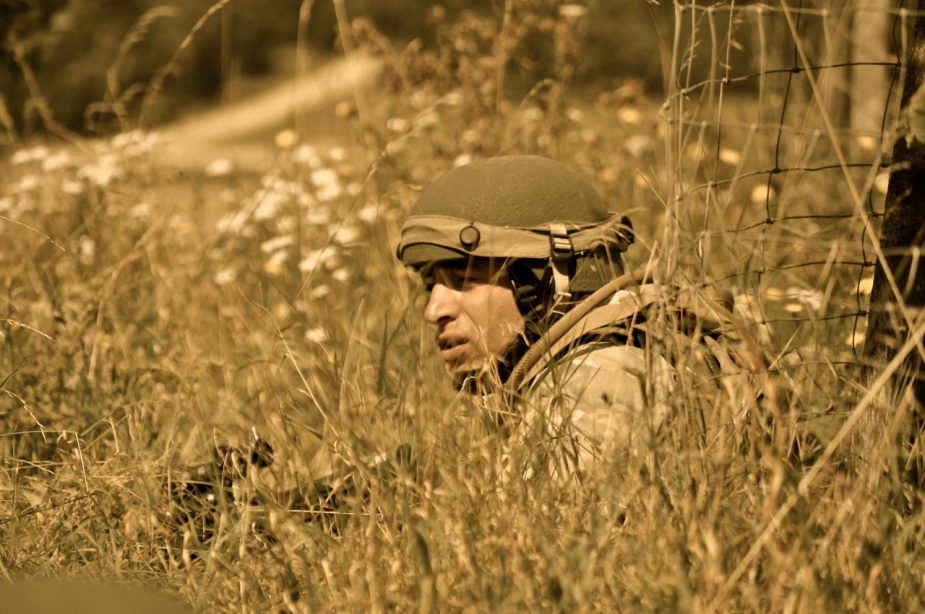 A Georgian soldier on overwatch, photo by author

I spent my entire embed with the U.S. Marines and Georgian Army trying to get someone to talk about the Russians – a gigantic elephant in the world’s living room – on the record. Once, I flanked a U.S. Marine Colonel, caught him by surprise, and he began to speak openly about the uptick in Russian belligerence from the Baltic Sea to Syria, about the global challenges posed by the Russian turn toward aggressive Eurasianist ideology.

But the full bird’s reputation, if not his career, was rescued by his Sgt. Major, who nudged him and said, “This is all off the record, right, sir?”

And so I closed my notebook. 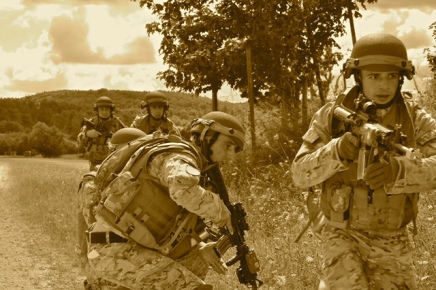 Later, when the training evolution had drawn to its exhausting conclusion, I interviewed Sanikidze for a second time. I don’t know why, perhaps because we got on well – he invited me to stay in his home in Georgia – he agreed to speak on the record about the existential threat Russia poses to home.

This was no small act of courage, given that the Russians routinely send senior Georgian officers – and Western diplomats – birthday cards, or well-wishes on the birthday of a child; messages not meant to be enjoyed.

Lt. Colonel Sanikidze told me: “We will never kiss their behinds, never again. We are our own people, and we want to be free. We turned to the West, and we are not looking back.”

This sentiment was echoed by every Georgian I spoke to, including Lt. Colonel Ambroladze, who was perhaps even sharper: “The Russians are a cancer on the world,” he told me.

In Georgian folklore, the Georgians were sleeping off a drunk when God was handing out nations. When they awoke, the countries were all handed out, and so God gave them Georgia, which he also chose for himself. 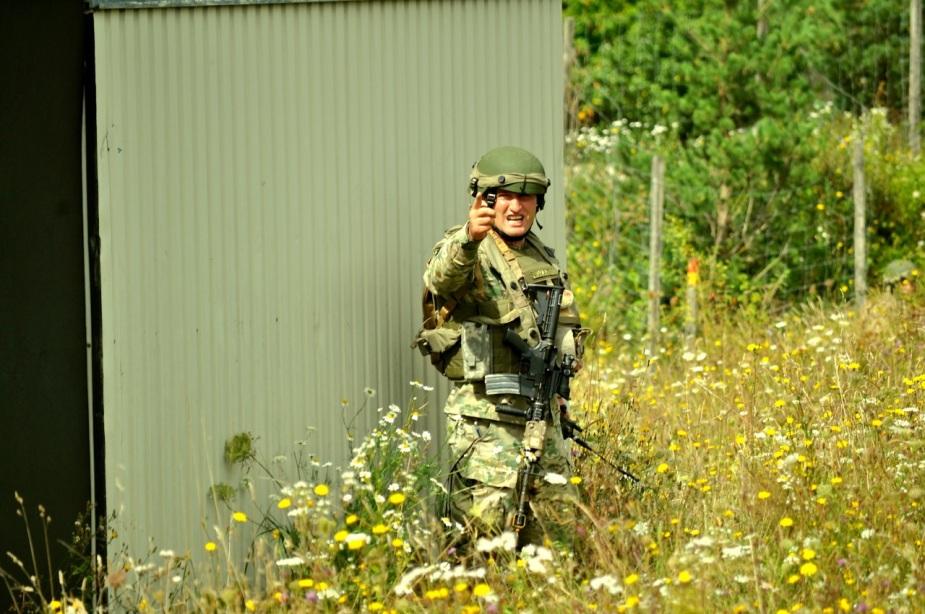 I learned that at a Georgian supra, which is a traditional feast, the final toast – and there are a LOT of toasts at a Georgian supra – is always reserved for the children, the next generation, who inherit everything we leave behind.

I found that poignant. Here at home, we seem to be engaging in an endless bout of hand-wringing, meme-writing, and pot-shotting over which athlete sits or stands during the national anthem, who uses which bathroom, and whether or not half of America is really corralled in a “basket of deplorables.” All of which are shameful, embarrassing, and decidedly First-World problems, exacerbated by a strange and nationwide intellectual and spiritual somnabulance.

So maybe we can learn something from the Georgians, who wake each morning under the shadow of Russian guns and hegemony, who take nothing for granted, who love to argue – about everything – and who have remained together as a people through centuries of daily hardship that we, in our decades of relative comfort, can only imagine. 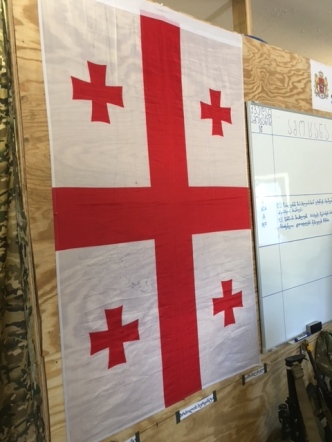 Reading the news, one wonders if Americans still have the stomach for the long fight of continuous improvement, the pioneering heart to see us through our great family squabbles, and to manage them without tearing the family apart. Given our increasing divisions, are we able to envision a common goal, to see ourselves made better by the struggle in reaching it, and to arrive there with more respect than ever for each other and the founding documents that make improvement both desirable and possible?

Or have we just become very good at a grenade-tossing righteousness?

Lt. Colonel Sanikidze is a remarkable man. He has done combat, against surreal odds, with an enemy parked in his backyard, one that would see his freedom, and the freedom of his children, buried forever beneath the designs of geopolitics. With his comrades, and for his people, he fights on.

At the end of our interview he drew me close. His eyes were hard. “You know,” he said, “sometimes even a mouse can kill an elephant.”