An Old Haunt, Torn Down

Bummer news this morning from an old friend and fellow denizen of the Nevada desert–they have finally demolished the ruins at American Flats.  To those of us who once tromped around in this amazing and ghostly wonderland, tucked into the hills outside of Virginia City, it comes like a gut punch.

Officially known as the Comstock United Merger Mill, the seven acre complex at American Flats was built in 1922, in order to process gold and silver ore using a technique known as cyanide vat leaching.  Once described as the largest concrete mill in the United States, it was abandoned only two years later.  In the subsequent years it became a kind of mystical playground for successive generations of desert explorers, and a fairly well kept secret, until half of the Bay Area moved into northern Nevada and it was finally taken over by graffiti artists and, undoubtedly, absconding parolees and tweakers with neck tattoos.

There was no such thing as a tweaker when my college roommate, Dominic Gerbo, and I used to pile into his white VW van–fondly known as Moby Dick–and bomb up the road into the old Comstock Lode country and wander the hills in search of one strange find or another.

American Flats was undoubtedly strange.  If it was not in fact haunted it encouraged visitors to believe it was, and particularly at night, with the wind blowing.  The music made by the wind in that place was occasionally, and abjectly, terrifying.  The complexity of the mill–with its post-apocalyptic ambiance, cold and dark concrete, underground passageways, and strange tunnels to nowhere, left entirely too much to the imagination.

It was dangerous as hell to be running around in there at all, but we didn’t consider that much in those days. 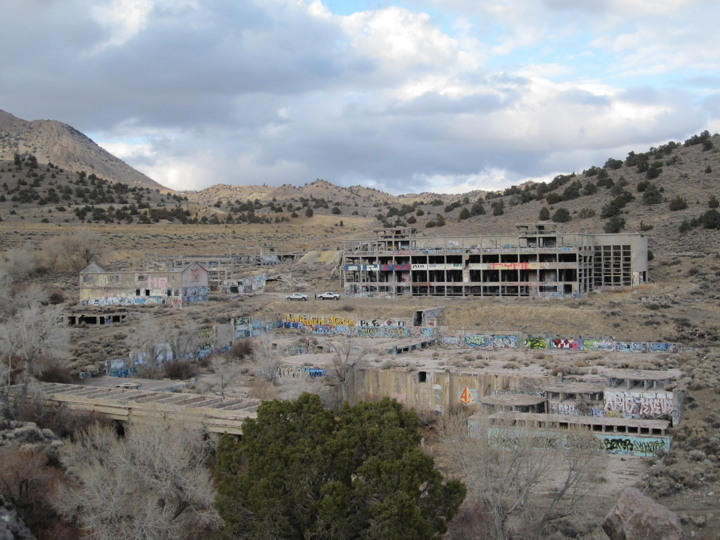 I had a good friend from Japan, Koichi Yoda, who was attending school in Nevada with a desire to become a filmmaker.  Koichi, whose upbringing in the confines of Tokyo left him somewhat mindblown by the Nevada desert in general, and American Flats in particular, managed to cobble together a script, corral some actors, and make a full-length movie in the ruins.  The film itself was an early, primitive, effort, but I give him high marks for choosing a great location.

Any building, once occupied and subsequently abandoned, feels like a portal into some other world, and American Flats existed like a passageway into several worlds at once.  To wander the place at night, where it was possible to stumble upon a small party with a campfire throwing bizarre shadows in the columns, or to hear shouts echoing through the tunnels underfoot, all while coyotes yipped in the hills, was to somehow exist on simultaneous planes–a hideout in a post-societal collapse, a medieval fortress in a dark and troubled kingdom, and the wild western frontier all at once.

It isn’t hard to see why they finally bulldozed it under, the world of liability being what it is, but for a while the Flats were a quiet monument to the weird and the haunting, and those of us who had the pleasure of wandering among the ruins, figuring ourselves out as we went, will always remember it for the alternative mindscape it once so wonderfully was.

Here is an interesting website, where you can wander American Flats yourself.  It is best viewed on a full screen.  Click on the red targets and stroll around a while, you might have fun.