I have a friend from the Marine Corps, John “Scoot” Davenport, who lives in Youngsville, Louisiana, and is an Admiral in the Cajun Navy. That’s a joke–there is no such thing as an Admiral in the Cajun Navy—but recently I had the opportunity to talk with Scoot about his experiences as a volunteer during the onslaught of Hurricane Harvey, in Houston.

Scoot, like all good sons of the bayou country, has a boat, an enormous affection for people, and a lot of neighbors who share his capacity for selflessness. That’s what the Cajun Navy is. There is no formal organization, except around a deeply held principle of neighborhood and community. “Most of us around here have boats for hunting and fishing,” Scoot told me, “So when we saw those people needed help, we just went. Didn’t even think about it. I have a friend who is a paramedic, and he jumped in with me.”

The trip to Houston, normally three hours, took nine, and where other vehicles were siphoned off the interstate by law enforcement, anyone towing a boat was allowed to keep heading into the storm. 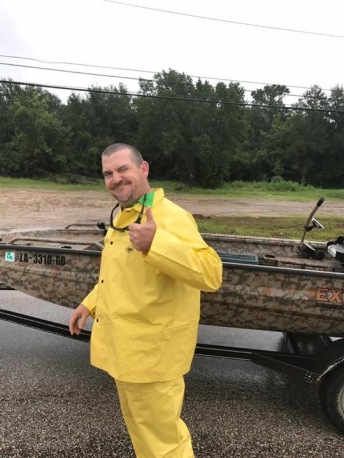 Scoot Davenport to the Rescue

Funny enough, the Cajun Navy does have an App, which allowed them to bring some loose measure of organization to what was otherwise, according to Scoot, essentially chaos.

After hours of mostly uncoordinated freelance rescues, Scoot and his squadron of volunteers discovered a series of assisted living homes under the floodwaters. The homes were difficult to see at all, Scoot said, because of the high water and visibility problems caused by navigating through treetops and powerlines during a still-active hurricane. But Scoot, and those oft-derided bayou boys, managed to evacuate nearly 180 elderly and desperate Americans, their wheelchairs, and their medical supplies, and haul them to dry ground and safety.

They did it because that is what good people, and good neighbors, do. And there was something else, another welcome patch of high ground in all that flooding: “You know,” Scoot said of his experience, “I didn’t see the first Antifa, BLM, or Nazi protest the whole time I was there. Nobody cared about politics or race or religion or sex or anything of that. It just didn’t matter.”

The extraordinary human response to Hurricane Harvey might rightfully be seen as a powerful counter-punch to the noisy and angry narrative that submits every high-visibility moment of cultural and political friction as evidence of an America unraveling at the seams.

We would do very well to consider long and hard who is behind those fringe narratives, how they benefit from pushing them, and what it is they actually want.

Thankfully, I mark an alternative tone amongst the people I meet. While acknowledging that there seems to be an anxious struggle for the American soul underway, they are mostly perplexed and exhausted by the divisive vitriol. They are tired of the daily “panic broadcasts” and the big-money engines driving an endless loop of crisis journalism and fear peddling. This includes the “bigotry is big business” types who keep insisting that we are all, inescapably, racists and chauvinists and homophobes. 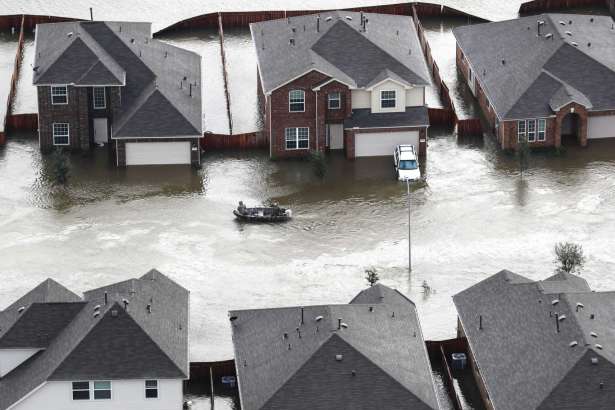 A Lone Boat Patrols the Suburbs of Houston

The folks I talk to are perplexed because that narrative—aimed directly at them– doesn’t square with their own experiences, or beliefs, and they are exhausted because it is a relentless bombardment of media-driven opprobrium. Sadly, the average American gets steamrolled in the conversation, though it is the average American—in the interest of objectivity–whose voice should probably get the most airtime.

It has taken an Old Testament-style disaster to change the focus, however briefly. The truth is that the average American is a far more enlightened, affectionate, and responsive neighbor—even with our differences–than a total outsider might come to believe.

Maybe that’s Pollyanna, but optimism was long considered an essential American trait—before it was replaced by the dour, infectious, and ultimately destructive cynicism now so much in vogue.

Instructively, and I think these things are related, it would be hard to find a more cynical bunch than our representatives in Congress—whose approval ratings have cratered in the 20% range—and who seem, as a body, perfectly incapable of supplying any leadership at all that doesn’t line their own pockets or guarantee their own healthcare for life.

Congress, collectively, has done a sufficient job of supporting Wendell Berry’s notion that “The great enemy of freedom is the alignment of political power with wealth.”

Back in the inner-city of Houston, where there is no wealth or political power, Scoot and his fellow sailors in the Cajun Navy drifted up on a young man, probably 13. He was pushing his bicycle through the floodwaters, a knapsack on the handlebars. The rain and the wind were relentless. Scoot asked if he lived nearby, if he needed help. “No,” the young man said, “I live two miles from here. I just told my parents I wanted to help carry medical supplies.”

Catastrophe on the scale of Harvey has a way of cleansing the lens because it strips life down to its meaningful essentials—food, water, shelter—and erases the day-to-day luxuries of philosophical waltzing, meme-warfare, and virtue sniping. The hardest part, and there are plenty of hard parts coming for those unfortunate people who have lost everything to this storm, will be remembering what it was like when, for a little while at least, the only thing that people saw, and what they acted on in countless scenes of affection and selflessness, was another human being in need of help.