We don’t make as much of Christmas anymore. Each year the tree gets smaller and we put up fewer lights. It isn’t that we’ve lost the spirit of the thing.  Mostly, we just fall behind the season. We aren’t alone.  By mid-May the last of the late Christmas cards usually trickle in, bloodstained and dusty, like the final dispatches from some epic frontier battle—big village, come quick, bring packs. The cards, which mean well, are always full of suggestions that a year of events have overtaken the writers, and are a subtle mix of understated regret and cautious, spiny optimism.

And anyway, I’ve eaten bad Chinese on more Christmas Eve’s than I’d like to admit, which has had a cumulative effect on my store of holiday enthusiasms.

This morning I woke up late from a good sleep, the kind of sleep that is hard to get unless you have already died. Waking, a thing that happened like a slow trip to the surface in a diving bell full of echoes, I realized my sleep was a cousin to the kind of sleep my grandfather embraced one morning in a Reno motel room.

I imagine him then, wracked and already cadaverous, sitting up in bed with a strange smile and reaching out with those spindly white arms to embrace the ether, uttering a final, almost ecstatic “Oh,” and falling back on the bed. I’d like to think it happened that way but I know it didn’t.

Somehow, I got dressed. I made my first cup of tea and resisted a sudden impulse to watch the Queen’s annual dose of holiday platitudes to The Commonwealth. Instead, I sat down in the kitchen window with a steaming mug and realized that every one of my joints has settled into a kind of permanent ache.

That aching, of course, portends a long degenerative slide into other inevitable aches and pains. I thought of various deserts and jungles and city streets where I have sacrificed my body to miserable marches and overblown notions of duty that never actually ended up going anywhere.

There is a cure for this, which is a better exercise program, but instead I watched the dogs, out by the henhouse, running laps in the snow. I was still in the diving bell and struggling for self-possession because the alternative was forcing myself into artless yoga poses on a wood floor.

It snowed last night but not much. This morning the sky was blue with fast moving puffs of cloud above the ponderosas. On this butte, where we live, we are always between weather events but I take my cues from the birds. It bothers me that I don’t have names for them all. I admire those little birds because they refuse the daily temptation to go internal. This morning they were hopping around on the rocks by the frozen creek in our yard, having a discussion I couldn’t understand.

Maybe they are finches. I want to call them warblers but that’s not right. I should know what they are called. I should be better than that. I should see a bird and say, “Well, friend, that’s a red-billed ox-pecker” with authority. I wonder where those little birds go at night and how they explain things to each other in the morning. 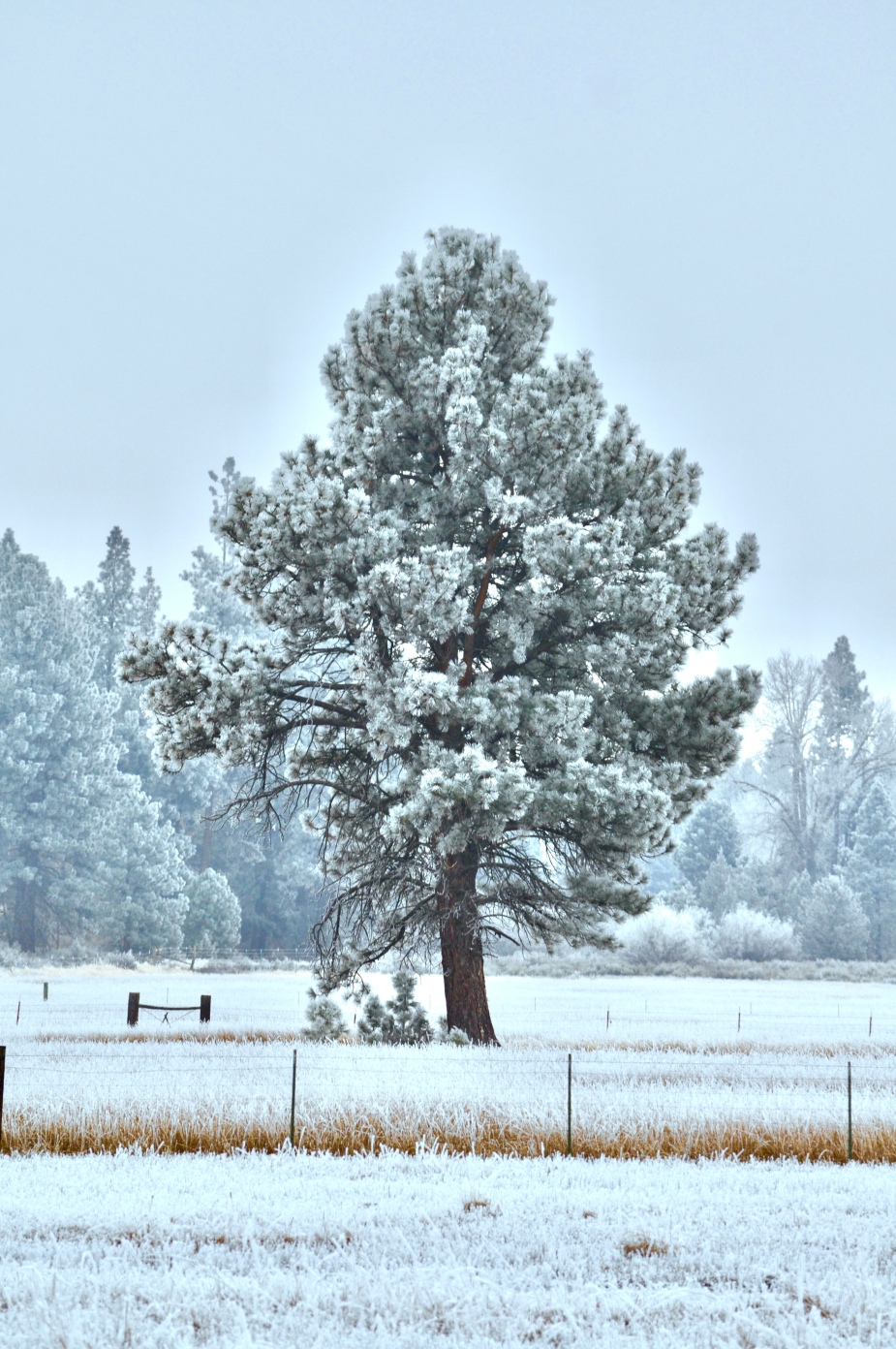 Two nights ago I was reading late, under the small cone of a lamp in my study, when two Canada geese swept over the house. First, I heard their wings brushing the air. It was that quiet, and they were that close to the window. There was silence and then the wings and then that honking which is a primordial song of happiness in flight.

Because I am often awake in the wee small hours I am aware of the nightlife in our woods. I hear the cat jumping onto the porch, fawns mewling. I hear a lone baritone frog who somehow survives single digit temperatures, and sometimes a wistful pack of coyotes cracking open a portal into the underworld. My favorite is an owl that suddenly starts talking to nobody and waits patiently while nobody answers.

The owl reminds me of a man I saw once in the British Museum. He was standing next to a portrait bust of Ramses II and having an animated conversation with himself. He would talk at length, then fold his arms across his chest to listen, and because he occasionally laughed he seemed to be enjoying the witty rejoinders of someone utterly invisible to the rest of the world.

I am often overwhelmed by a desire to sleep outside which is both a courtship and a natural cure for ailments of the mind.

Once, on the banks of the Susquehanna River, I had a moment of absolute clarity while standing next to a Polish poet who later became famous. For just a moment I understood, perfectly, a monk’s desire to live in silence. I don’t know if it was the poet, or the humidity, or the languid movement of the river in mid-summer. I was reading a lot of Dostoevsky in those days and its possible I had simply walked into a seductive ambush.

I contemplated my own vow of silence at that moment but instead I went for a hike in Rickett’s Glen State Park. Then I wrote a bad poem about an imaginary hermit that I was forced to recite in front of a crowd of people dressed in Harris Tweed, including a mildly pompous professor who lived self-consciously in a barn and serially mispronounced the otherwise beautiful Spanish word Nevada.

It’s winter, but just now, down at the barn, the horses are standing half asleep in pockets of warm sunlight. They have eaten and their bellies are full and warm.

This Christmas morning I am tempted to join them, to find my own place in the bright patches of snow between the trees. I would stand as still as they do, my eyes half-closed, my head hanging ever so slightly. I can imagine doing that for hours, and maybe even falling into a standing dream of the kind that horses have in moments like this, which can only be of warm and golden pastures under the bluest skies, and swirling clouds of summer songbirds. I would happily stand there among them without moving at all, falling easily into the same reaches of an equine dream, and without even needing to breath.