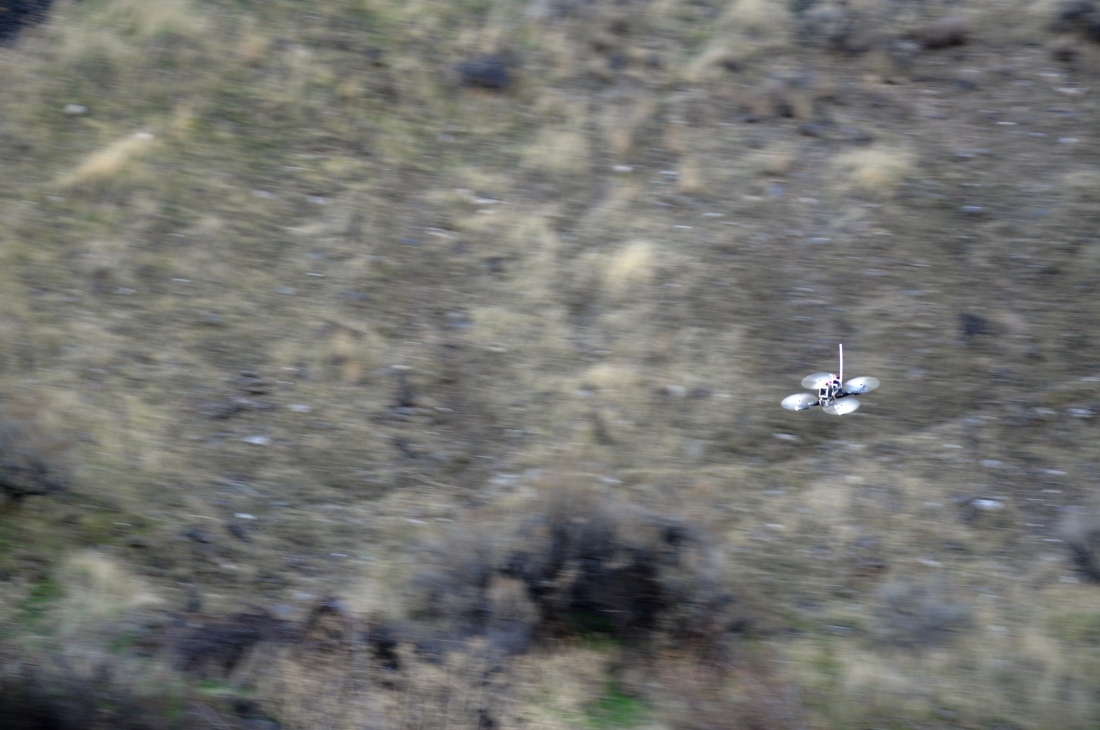 There has been an interesting conversation going on all around me that I haven’t been paying enough attention to. The topic is drones, drone technology, and the growing group of accomplished and fanatical pilots who fly them.

Most of us are probably aware of drones in one form or fashion; we know that the military uses them, in a variety of configurations and missions, and we might know that behemoth corporations such Amazon, UPS, and FedEx, are experimenting with ways to use drones, and driverless cars, to deliver packages and people to their destinations. We might even have a friend who plays around with one.

But what I didn’t know, until a few days ago when I travelled with Brett Miller–founder of the Sisters, Oregon, based non-profit Warfighter Outfitters–into the lower Deschutes River canyon for a promotional video shoot, is how truly fascinating, useful, and fun they are.

While driverless cars are essentially drones too, much of the allure of aerial drones lies in the fact that, as a pilot, one can don a pair of goggles, and with a controller, fly them in the first-person view, as if you were actually sitting in the cockpit of the tiny machines. Drone pilots, I suspect, would argue that for all intents and purposes, they ARE in the cockpit, with one critical difference: they can walk away from every crash. 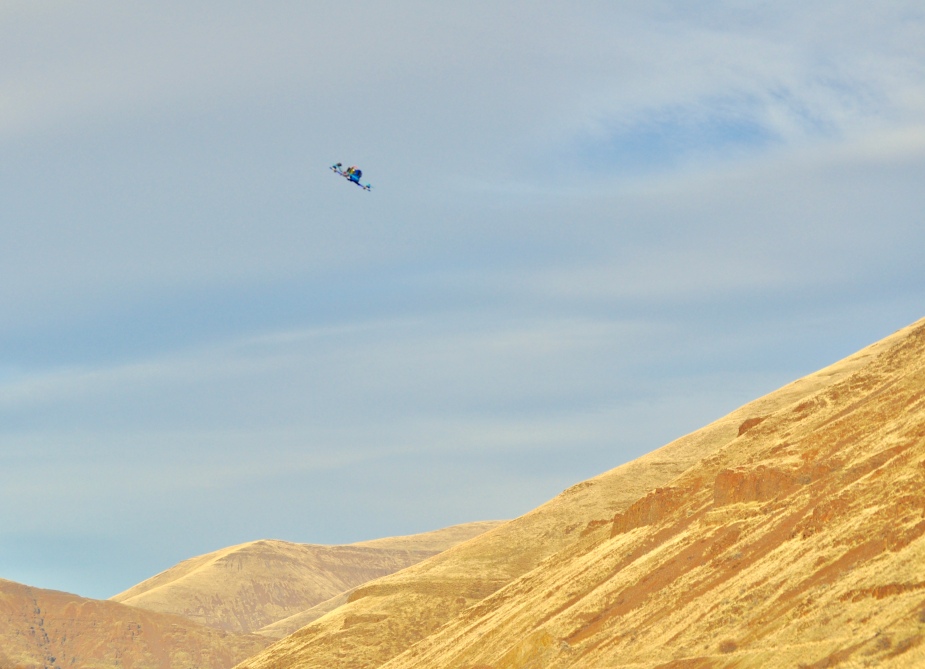 Chased Downriver by a Drone

FPV, for short, allows an earthbound pilot to scream through canyons, race through buildings, make low-level runs over crashing waves in the surf zone, or play a simple game of chase with other drone pilots, a kind of victimless dog-fighting. The only limits are the pilot’s skill and imagination, and the technical capability—and battery life–of the drone itself.

There is a growing body of accomplished videos shot and produced by FPV pilots on YouTube, which include dramatic scenery from around the world, shot from rarified angles, and not a few equally spectacular crashes.

For the competition minded, there are now drone-racing leagues, sponsored by media heavyweights such as ESPN and FoxSports.

There are some broad and sensible rules, of course–no flying in national parks or monuments, for example, and there are enough drones and pilots now flying around the country that the FAA, in order to apply some measure of accountability, requires drone pilots to register their craft and put tail numbers on them, as one would license a car or an airplane.

With Goggles, an FPV pilot is virtually in the cockpit.  Robert Pries.

Somehow, all of this exceptionally interesting, and rapidly expanding dronery had escaped me.

Prior to the video shoot, my experience with drones was similar, I think, to most people’s:  I was aware of them, but I’d only very rarely been around them.

Last year, while covering the Orbital/ATK military weapons expo in Big Sandy, Arizona, I was able to watch a number of drones put to use by a television production crew, and once, years ago, I was hiking near the Hurricane Deck in California’s Santa Ynez Valley when a Predator Drone from Vandenburg Air Force Base scared the hell out of me–flying slowly, and quite suddenly, overhead—almost close enough to touch.

But before last Thursday, I was, it turns out, largely drone ignorant.

For this promotional video shoot, and believe me, one could find a lot worse places to film dramatic video than the lower Deschutes River, we were joined by experienced drone pilots (please click) Robert Pries, a former U.S. Navy cryptologist and apprentice electrician who has been building, and piloting, his own drones since 2014, and (please click) Adrian Higham, a mountainbiker, camera operator, drone builder and FPV pilot from Bend, Oregon.

Both pilots graciously volunteered their time, and expertise, to shoot drone-based video to help raise money for Warfighter Outfitters’ mission of providing disabled veterans with fishing and hunting expeditions free of charge.

The sublime irony of making jet-sled runs through a Pleistocene river canyon, under the watchful gaze of bald eagles, great blue herons, and herds of bighorn sheep balanced on the canyon walls, and simultaneously filming it all with cutting-edge drones the size of a salad plate wasn’t lost on anyone.

But as Robert and Adrian set up their gear on the banks of the river, and started flying their drones, I was absolutely captivated by not only their skill at piloting these colorful, and surprisingly quiet, quad-rotor machines at breathtaking speed up precipitous cliffs and down, or across the river and through the treetops, but also by a sudden awareness of the simple enjoyment, and ultimate utility, of the drones.

Pries, who flies one of his small squadron of home-built drones several times a week, was enthusiastic about the potential of drones for commercial use. He pointed to their efficiency and utility for delivering packages to remote areas, or for more pressing details like delivering defibrillators to stranded patients on a wilderness search and rescue mission.

And, as if to emphasize the point, just as we were having that conversation an ODFW helicopter descended into the canyon and flew over us on what appeared to be a fish-counting mission.

As in all things photography, light was an important element of these video shoots, which consisted in making a series of high-speed boat runs through some of the more dramatic riffles and canyon turns offered by the lower Deschutes. Brett kept us afloat until a drone was up, and then we started our run downriver–circled, chased, dive-bombed, and essentially harassed by the drone as either Robert or Adrian was at the stick, collecting a video take of each pass.

I will admit that we made many of these high-speed runs, and shamelessly brag that each one was better than the last.

Brett Miller, Navigating a Speed Run on the lower Deschutes

One of my fellow passengers on the boat was Kurt Pries, of Prineville, Oregon, who started flying drones with his son, Robert, 18 months ago. Between takes, while we lolled in a surprisingly warm and golden December sunlight that lit up the canyon walls and flashed in the river’s ripples, Kurt told me that he enjoys flying his own drones with friends, and sees the hobby as a great way to spend time with his son. “You are going to crash a lot in the beginning,” Kurt said, “But you actually get to fly, and it really is a lot of fun.”

Issues of privacy and accountability in the use and enjoyment of drones remain, and legal questions involving their use by law enforcement are winding through the courts, but after watching these drones fly one is left to wonder, at the present rate of technological achievement and advancement, where drone technology might be just a few years from now.

Indeed, all of the pilots mentioned that keeping up with the change is difficult. Obsolescence in drone technology can, and does, happen overnight. 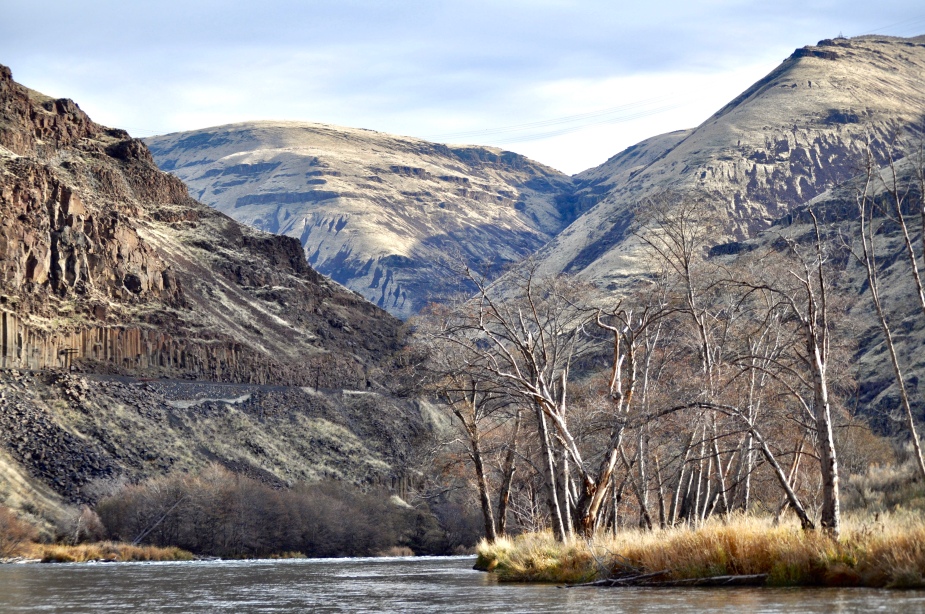 Nature Has the Last Word

And no matter how skilled a pilot may be, no matter how many hundreds or thousands of hours he or she might have on the stick, crashes still happen. As it did for Adrian, on our last run of the day, when he turned his drone upriver into the sun, chasing the jet-sled through a fast and turbulent section of the river. Momentarily blinded, and too close to the water to pull up, Adrian’s drone went into the drink and his goggles filled suddenly with static.

In drone flying, as in most things, nature often has the last word. With a fair idea of where the drone went in, we searched and searched but never found it. But it wasn’t a total loss.  We’d been filming, flying, and sledding all day, enjoying the canyon and those fast runs across the water, and maybe we had forgotten, just a little bit, about the abundance of life all around us.  And so, in the process of searching for a lost drone in the remarkably clear and fast waters of the lower Deschutes, we were both reminded and rewarded by that abundance in the vision of magnificent steelhead, swimming endlessly upriver in their own solemn pursuits.