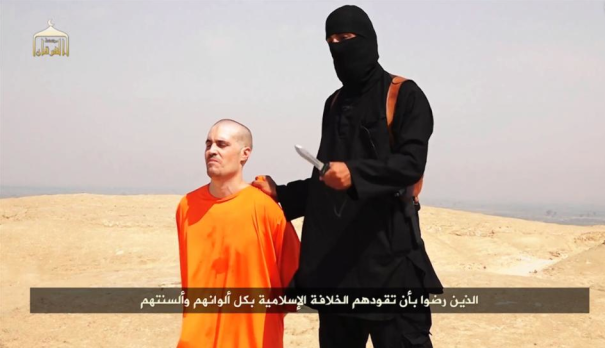 The Murder of James Foley

Take a long, hard, look at this photo, if you can stomach it.  While you are looking at it, try to imagine, if you can, what is going through Mr. Foley’s mind.  I mean really try to imagine it.  Put yourself there, on your knees in the sand, hands bound behind your back, in an orange jumpsuit, the images of Daniel Pearl and Nicholas Berg clear enough in your mind that you know exactly what comes next.  There is nowhere to run.  There is no mercy to beg for.  Imagine being forced to read a script condemning your country, and your family, and knowing that the obscene words you are reading will be the last ones you ever speak.  Imagine it.   Imagine the blade in the corner of your eye, and the tight grip of the executioner on your neck.  Imagine that for a minute, if you can, and when you are done you will have learned all you need to know about Islam as a peaceful religion.

Which Wahhabist, then, is the tolerant one?  Someone please point him out.  Let’s not mince, shall we?  Enough with the milquetoast political dissembling by the Neville Chamberlains of our own time.  Enough with compromise.  Islam, as practiced and proselytized by its most vociferous adherents, is neither peaceful, nor a religion.  At it’s heart, and by its own admission, it is a totalitarian political regime bent on nothing less than the total destruction of constitutional government and cultures.  It is a Sci-Fi Borg machine, practiced by a savage and uncompromising collection of criminals, troglodytes and reprobates, homicidal mental midgets who seek only to control your mind, your body, your purse, and the destiny of your soul on pain of execution.  It is a political construct wholly incompatible with life as we know it.  Free peoples, bound by the rule of law, and governed under the notion of unalienable rights, not least among them the separation of church and state, simply cannot co-exist with militant Islam.  A Muslim, by definition One Who Is Under Submission, will never admit this much, or agree to it, and will sometimes loudly denounce the very notion, but there it is, nonetheless.  And yet, and yet, despite the virtual flood of evidence pouring in daily about the very real intentions of Islamic nut cases to exploit and destroy us, the same western cultures that came together to once and finally destroy the evils of National Socialism in Europe, who made the hard sacrifices necessary to defeat the soul-sucking virus of Stalinism, who cured polio, for godssakes, seem strangely somnambular, spavined, without stomach or backbone, as if, having turned on ourselves in some childish and desperate fit of self-analysis, we might just actually collapse on the couch with a box of tissues.

The campaign fad of declaring war on this or that societal ill, poverty (wrong strategy), drugs (abject failure), privilege (whatever that is), has served only to diminish the importance of the only real war we are actually engaged in:  the war against Islamic fanaticals.  And still, the apologists run amok.  Foley himself was clearly sympathetic to the plight of muslim peoples, and look what good it did him.  This morning we are treated to the heavyweight diplomatic commentary of various Hollywood types such as Mia Farrow, who appears far more concerned about taking down the video than with taking down the insects who created it.  Quickly:  as a reward for enriching these mouthy professional clowns beyond imagination, America deserves ten years of silence from the celebrity intellectual set.  Rather you stay in your trailer, berating menials and demanding star shaped sandwiches than weighing in on the defense of civilization.  For all the good that would do us, given the abysmal presentation of smug sorority tarts like State Department spokesman Marie Harf, or any other of the designer diplomats trotted out to treat the American public with daily disdain.

Worse even than all that, there is a growing and feckless class of American citizen who seems to believe in precisely nothing, except perhaps the immediate need for bicycle lanes and roundabouts, or the outlawing of Big Gulps, while uniformly accepting the odd and distinctly ahistorical notion that “violence solves nothing.”  Pshaw.  Violence solves all kinds of things.  It solved Hitler.  It solved George Armstrong Custer at the Little Big Horn.  From the hill of historical perspective, it seems quite clear that judiciously applied violence by free peoples, in the name of free peoples, in order to preserve free peoples, might actually solve the oppression and bodily mutilation of women, the genocide of Yazidis, the kidnapping of schoolgirls for sexual slavery, the beheading of western journalists, the destruction of world heritage sites, the slaughterhouses of Syria, and the particularly heinous denigration of Mickey Mouse.  What is more, we can quite clearly see that those who forsake the use of violence–even to defend their very way of life–most often end up being the victims of violence perpetrated by very, very, bad people, who harbor no such compunction.  This same class of pseudo-spiritual, cultural relativist seems quite content to have us curl up into a fetal ball in the face of existential threat, to endlessly demand negotiations with animals who cannot be negotiated with, and whose every growl and scratch mark tells us so.  After achieving the strange spiritual plane in which they refuse to acknowledge certain realities of nature, while simultaneously worshiping fluffy and unrealistic notions of what nature is, they would have us attempt to negotiate with puff adders and great white sharks.  No, my friends, we cannot all get along.

I watched this murder.  I watched the murder of Daniel Pearl.  I watched the murder of Nicholas Berg.  I recommend you watch the videos too, if you have the stomach for it, and listen to what the homicidal lunatics in the videos are saying while they cut the heads off of innocent people.  Listen closely.  Believe what they are saying, for the zeal with which they announce their intentions, and reveal their sociopathic reasoning, isn’t manufactured for our amusement.  Used to a shambling, shoddy, prevaricating type of leadership, it is much too easy for us to dismiss the clarity with which the Islamic scumbags address us.  Know this:  they aren’t kidding, and they aren’t in the business of obfuscating their intentions.  If they say they are going to destroy the Bamyan Buddhas, they are in fact going to line up a battery of howitzers and cannonade them into dust.  If they say they are going to execute a journalist, well, then.

The president recently bragged that there was no real need to continue what is, in fact and essence, a cultural war for survival.  His remarks, appalling and flippant at best, are even worse in light of James Foley’s public execution, and the promised execution of journalist James Sotloff in the coming days.  Beheading is not a junior varsity move, nor is genocide, or any number of the lesser included atrocities committed now daily by a war machine of fanatical totalitarians.  It is quite clearly varsity behavior.  Perhaps it’s time that the cowering, mincing collection of career politicians we call Congress, an institution designed as the highest representation of the hopes and ambitions of free peoples, not just here, and not just now, but everywhere and for all time, pulled on their big boy pants, and sent our own professionals back on the field to find them, fix them, and ultimately destroy them.