Last week we turned the ranch chores over to a hungry U of Oregon student, packed up the dogs, extra water, and a chainsaw, and blasted southeast out of the trees onto the basalt and granite outback country.  Through Silver Lake then, home of the Cowboy Dinner Tree, on through the beautiful, lazy curves of Summer Lake and the Paisley Caves where–God bless them–scientists have discovered the oldest fossilized North American human turds, known as coprolites.  We stopped for lunch in Paisley, headquarters of the mighty ZX Ranch–chicken fried steak and eggs, hold the gravy, Merle Haggard singing about his mother, and prison, on the counter radio.  Then back in the truck and south again through Valley Falls where great herds of pronghorn were moving through the buckbrush and alfalfa.  Much of the drive was a highway chess match with slipshod caravans of “Burners” on their way south to the Black Rock desert and Burning Man, who jammed the narrow highway with every conceivable drivable contraption, RVs, Subarus, and technical vehicles, including one old man at the helm of what appeared to be a fully operational steam calliope.  Still, not even a heavy migration of Burners can entirely wreck the view of southeastern Oregon, with baseball playing on the radio, and the sun shining on the far buttes, so we drove on, through Lakeview, and finally over Cedar Pass into the Great Basin and Cedarville, California.

I must confess now, and for all time, my intention to commit a couple of felonies on this trip.  It was not the primary motivation for our sojourn, more a crime of opportunity, but I did, in fact, leave the ranch fully intending, and with malice, to steal a road sign.  The plan was  to break out my trusty Stihl chainsaw on the side of a dark road, saw through the post, stash the loot under a blanket, and transport it back across state lines, thereby becoming a full fledged Enemy of the State.  My wife was to serve as lookout and getaway driver, wrapping her firmly into the conspiracy, and exposing us both to the potential of that particularly embarrassing modern phenomenon:  the internet mugshot.  Still, we felt pretty good about the operation.  It is a great American tradition to decorate barns with road signs, and our barn wall is decidedly naked, in need of upgrade, and we were, after all, in pursuit of a rare and distinctive prize:  a Nevada style OPEN RANGE sign.  To the highway sign connoisseur, the Nevada version of the OPEN RANGE totem is an artistic gem, a rare and distinctive illustration of an actual wild cow, on the fight, afraid of nothing, daring you to strike it.  It is a road sign with panache, a rare moment of government inspiration, and far superior to the California or Oregon versions, which feature a domesticated, melancholy, cud-munching dairy cow.

But first, the Cedarville Fair.  A quick word about the Cedarville Fair:  if you are casting about in our post-modern, save the snowy plover, ban fracking, universe for a cause, try doing something, anything, to save the Cedarville Fair which, like the life it reflects at every turn, is in danger of disappearing under the flood of global nonsense.  Grab a room at Surprise Valley Hot Springs, (avoid #2, or #15) then drive into town.  It’ll cost you three bucks at the gate, and once inside you’ll be surrounded by suntanned ranch kids in cowboy hats, young girls loping their horses simply everywhere, working sheepdog trials, a greased pig contest, and worn-out buckaroos, seemingly carved out of juniper, asleep in the shade of the cottonwoods.  And try the basque barbecue on Thursday night, lambchops and homemade bread, a plop of salad, a plastic cup full of red wine, a picnic table all your own, and The Heartless Band tuning up on stage.  Alas, you could do much worse in a bid to save the planet.

Friday morning was the horse-show, where we watched my dear old mum pick up a blue ribbon–cheers for the old girl–and afterward we headed in for lunch at The Country Hearth, already overflowing with Burners in search of a final decent meal before the Black Rock playa and that alternative universe.  The service was shoddy, but the food was good, and after good-byes Wendy and I drove south, down through Eagleville, across the state line into Nevada, where once upon a time I lived in a shack on the edge of Duck Lake–dry since about the time those Paisley turds were laid down–and wondering often in the pages of my daybook where I might be, and what my life might look like, in twenty years.

Well, old self, it turns out if you ride a circle long enough, say twenty years, you might end up where you started, and one day crest a hill amused to see your old camp still sitting there, still forlorn in that vast Nevada emptiness, a gunmetal shack in the occasional shade of a homesteader’s plot of poplars.  They’ve improved the place some, and gone to haying.  The old horse corrals were still there, but there was an industrial scale to the pole barns and pivot irrigation that simply didn’t exist when I lived there.  We couldn’t get through the gate, now adorned with an outright lie warning copper thieves of monitored video surveillance, but I wouldn’t have pushed through anyway.  All I wanted to do, all I needed to do, was blow a kiss in that direction.  Instead, we turned back onto the Wall Canyon Road, jouncing over rocks, fording dry streambeds, pushing deeper into the desert where I once rode the ridgelines looking for stray cattle, singing out loud to myself, scaring my horse and the wildlife.  Were we still hunting for a road sign, then?  I doubt it.  I was showing off to my wife, resurrecting ghosts of an old life, chasing memories up out of the brush and the rocks and the deep-cut canyons.  Mostly, we filled the truck with powdery dust. 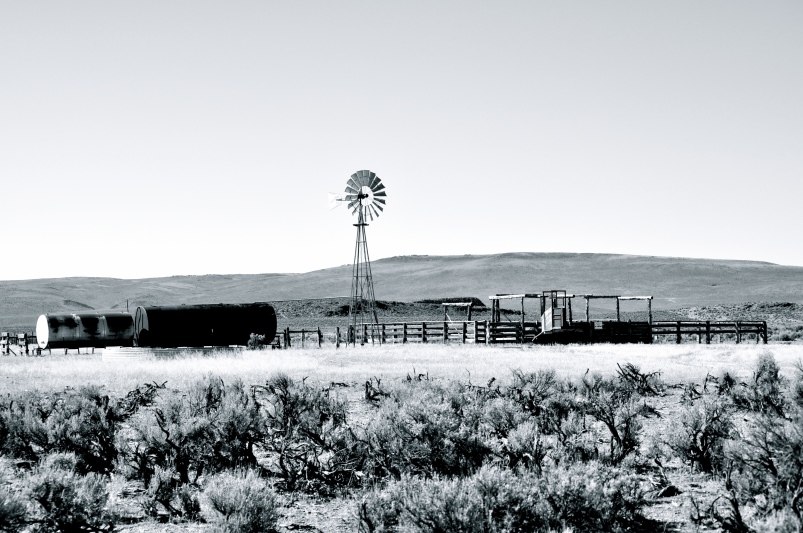 Back to the highway then, the sun setting, driving north, we dodged the southbound parade of high speed Burners tearing up the road, and made it back to our room before sunset.  We poured out some cowboy coolers (boxed wine, ice, and 7-Up), then took a long and satisfying soak in the mildly sulfurous tub.  We read books.  We took the dogs out for a final piss in the rabbitbrush.  And we slept like royalty, I think, even on a bad mattress, even with the windows open to a cold night breeze and the yip of coyotes in the dark, our minds tired and open to suggestion, desert views playing out in our dreams.  And the desert, when you see it right, can envelop you like that, can’t it, and hold you like a lover, stroking your forehead and telling a good story to help you sleep.

In the morning, out of food, we charged out east, feasting on peanut M&Ms and a handful of jerky, blowing over a cattle guard where the California asphalt gave way to Nevada and dirt roads, following the corduroy trails into the sheer cant of sunrise in August, where the light plays tricks in the rocks and the sage, stretching basin into range, range into basin, and every crested hill reveals another deceptive view to the far horizon.  We drove this way for hours, feeling the first hint of fall in the crisp wind rushing out of the canyons, until we made it to Steven’s Camp, near the north gate of High Rock Canyon and the Applegate Trail, where dreams once perished in starvation, madness, and Indian attacks.  I wondered then, in the middle of that hard nowhere, staring out across the High Rock country, what one of those pioneers would think of the modern Burners, and just how much those Burners know about the Black Rock Desert.  Have they read the stories, or heard the tales, of oxen stampeding for water, only to scald and die in the double-hot pools on the western edge of the playa?  Do they know about the young girl, dying of thirst, who got into her mother’s bottle of laudanum and died there, overdosed on the playa, the wagon train stopped, the oxen drooping in the heat, while her mother wailed against the perfect bluebird sky and the men, now skin and bones, dug into that hardpan with spoons to bury her?  Perhaps they do.  And maybe it simply doesn’t matter.  We let the dogs run and explored Steven’s Camp, where someone had recently killed a deer and skinned it under the hanging pole, leaving only a ribcage and a pair of hooves.  We stood listening to the wind in the rocks, the water running through cattails and deep green grass, until the call of the road, and our own home, couldn’t be ignored.

We never did get our sign, Nevada having adopted yet another tragic California habit.  Instead, we settled for a country fair, for a chance to see my mother enjoying her life, for visiting memories in that unreal desert–ever may it be so–abandoned cow camps in the dry basins, massive mule-deer bucks in the sage, the quick artesian springs at Steven’s Camp, the ghost of a young girl from a thousand years ago.  There were the Burners too, a kind of modern pioneer, I suppose, if I’m being generous, broken down on the side of the road, their possibles scattered in a search for just the right tool, their clothes ruined, their hair in dreads, determined to finish the trail.  But we drove home happier for all of that, against the traffic, still blameless in the eyes of the law, the dogs exhausted, back through a big and beautiful emptiness with the magic of Saturday baseball beamed into us via satellite radio.  We covered those empty miles listening to the Yankees and White Sox three thousand miles away, where it was Joe Torre day in the Bronx, and the batter was busy reading the seams on a circle change-up with two on and one out, the base runners peering in against the glare, watching the catcher, stealing signs of their own.