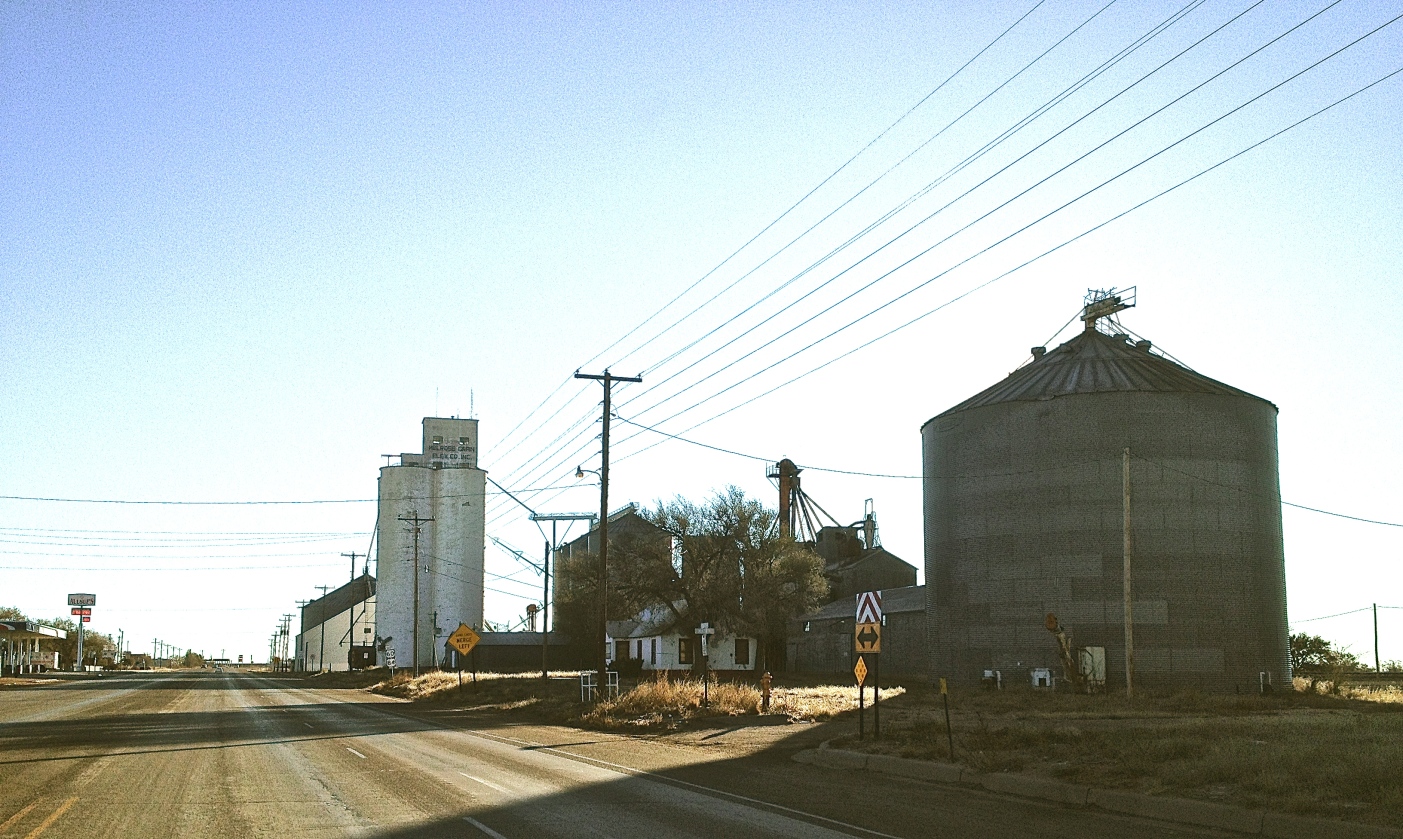 On a theme of Billy the Kid, Muleshoe, and The Chiminea Debrief…

We made Santa Rosa, barreling through snowfall so heavy it made me dizzy, performed a flawless locked-wheel skid at the entrance to the Santa Rosa La Quinta Inn, dumped our gear without ceremony, then headed back out into the storm to find some food.  Road hunger can become a debilitating condition, inducing near mania, and after some skirting around the icy streets of Santa Rosa, we managed to find a Subway buried inside the TA truck stop, where lot lizards in dirty pastel stretch pants were playing video games by the front door, eyeballing marks, a female trucker at a food court table was loudly announcing to her table guest that she had found Jesus while hauling bath towels through Nacagdoches, and a Guadalupe County Sheriff’s Deputy was pretending to shop for pretzels while surveilling three tweakers near the hot dogs.  It was not surprising then, days later, on our return voyage, when a tweaker–likely in the early stages of a meth psychosis–came creeping around the gas pumps, and our mini van, pretending to need gas for a phantom car somewhere down the road.  I had been watching his clever casing routine for some time, which included a plastic gas can prop, and a head first, waist deep, dive into a garbage can.  When he finally came to the driver’s window–slinking in from the rear–I had my Glock in hand and was fully prepared to put a tight group into his chest for God and Country.  I also invited him to go somewhere else, quickly, if he enjoyed his life.  He was apparently happy enough with things as they were, and scurried away, which is likely the best decision he has made in some time.  A quick word on this:  America is the land of opportunity, and possibility, two of the reasons we find it such a lovely place.  But with opportunity and possibility come unsavory, and sometimes dangerous, things.  If you are planning a cross-country trip, please don’t do it unarmed.  Don’t even think it.  I’m not interested in what the laws might be, either.  Laws that deny you the basic right to effective self defense are to be ignored.  They are, in my humblest of opinions, evidence of corruption in government and popular moral debasement.

He Died As He Had Lived, Billy’s Tombstone, Ft. Sumner, New Mexico

Next morning, the snow melted, we drove south into Fort Sumner, followed a two-lane country road for three miles, and pulled into the gravel lot at the Billy The Kid Museum and burial site.  The signs tell visitors that this is the “real” gravesite of Billy The Kid, which suggests that there are charlatans around faking Billy’s final resting place.  Strange behavior, but certainly no worse than the appalling case of failed robber Elmer McCurdy, who was killed in a shootout with the law in 1911, and whose embalmed remains were found sixty five years later, hanging in a Long Beach, California, funhouse, during filming for an episode of the “Six Million Dollar Man.”  For years, visitors and vendors alike supposed McCurdy to be a wax mannequin.  Alas, it was only Elmer, embalmed and mummified.  Billy, famously killed by Sheriff Pat Garrett, was given a proper bandit’s burial, and was eventually joined by his best friends in life, Charlie Bowdre and Tom O’Folliard, whose graves make up the trifecta, caged against repeated headstone thefts and attempts to dig up the deceased.  Because it was early we couldn’t get in the museum, but we paid our respects to Billy, and because it seemed to be what people do, I flipped a nickel into the cage, onto the concrete mound entombing young William Bonney for eternity.

And then it was back to the asphalt, a long, empty, gray ribbon stretching into a perfectly flat horizon, the sun rising in our eyes, racing enormous trains eastward, through the streets of sleepy Clovis, and finally across the border into Texas.  I had been studying the map intently and was eager to see some of these west Texas towns, Muleshoe and Sudan in particular, if only because their names have a certain appeal.  The poet Richard Hugo made great poetry out of what he called “Triggering Towns”.  He wrote about Montana places such as Silver Star, which he called the “final resting place of engines.”  Or Helena, “Where Homes Go Mad”.  So, on this trip, we were given the gift of Muleshoe, and Sudan.  Muleshoe?  Are you kidding me?  And in the event, while passing through this center of all things cotton, where every block is a series of tractor dealerships:  John Deere, Case, Massey Ferguson, interrupted only by churches and early bird diners whose lots were full of muddy pickups, where gigantic gins could be seen steaming into the blue sky on the cottony horizon, I learned that Muleshoe is home of the Mules, who won the Texas State High School Football Championship in 2008.  A billboard on the edge of towns says so, and if you know anything about Texas, you know this is important.

And so finally, Lubbock, home of the Red Raiders of Texas Tech, and more importantly, my friend Casey Smith.  I first met Casey at the School of Infantry, on Camp Pendleton, in what seems now like another life altogether.  By some miracle, when our orders came after graduation, we were lucky to be assigned to the same Fleet Marine Force unit:  Bravo Company, 1st Battalion, 1st Marines.  We spent our entire enlistment together, in the same platoon, enduring two deployments, and the years of shared hardship, sometimes misery, and leadership challenges, have created a unique and enduring bond of brotherhood.  So it was with great pleasure that we pulled into the driveway of his house on the edge of Lubbock.  We ate.  We fondled his guns.  I played on the trampoline with his kids.  We swung around on the gigantic jungle gym Casey has built, both of us struggling badly to climb the rope, which was a source of no small embarrassment and not a few laughs.  And as the cold Lubbock night settled in, Casey fired up the backyard chiminea, brought out the bourbon, and we sat in front of the fire in a slow rolling debrief, swapping sea-stories, trying to remember names, laughing, cursing the loss of a greater era, polishing our own brilliance and perfection as Sergeants of Marines with the gift of time and distance.  I was reminded, even as I started to slur and see two of everything, that what the Marine Corps does best is build teams, relationships of enduring loyalty.  Any one of us can get our ass kicked alone, that doesn’t require any special skill, but a platoon of highly motivated and exceedingly tight knit Fleet Marines is a formidable thing.  Trust me.  And it carries on, years after most of us have discharged.  By sheer happenstance, while we were talking and feeding the fire, Casey received a Facebook message from another of our former platoon mates, discussing plans for our reunion next year near Houston.  It is a rare thing in life to have, and keep, a friend like Casey Smith.  Some time after our stretch in the Gun Club, Casey joined the Army, and was sent to Iraq, while I was toiling away on the streets of America as a cop.  I remember one morning, sitting in my black and white, watching Santa Barbara bums piss in the bushes by the train tracks, when Casey called me from some plywood call center in Anbar Province.  What I felt was shame, a deep and terrible feeling that if anything happened to Casey, I would never forgive myself for not being with him in that fight, as I should have been, pouring rounds down range, or jumping on a grenade, whatever it took.  Say what you want, that’s as honest as I can be about it, and I am thankful every day that he came home to be with his wife, and watch his children grow up.  But it’s our bromance, after all, so go get your own.

I woke up the next morning not feeling well.  I had earned the punishment I was about to receive, which was a long drive through a whole bunch more of Texas, from Lubbock to Austin, while bourbon toxins worked their unholy way out of my bloodstream.  But the road was calling us again.  With much regret, we loaded the dogs, squared away our possibles, bear-hugged the kids, then pulled out onto the 87 South, through Tahoka, Lamesa, and Big Spring, still deep in cotton and oil country, the bar ditches full of cotton bolls blown out of trucks, and pumpjacks working feverishly in the morning sun.  Ahead of us, the Texas Hill Country.