This article originally appeared in The Nugget Newspaper, August 23, 2016.

On the outskirts of this training village, known to the real world as Raversdorf but today serving as the notional Afghan village of Spinchai, someone has propped a large stuffed panda on a fence. The panda stares out over the long, dusty approach to town and looks sad.

This morning, Charlie Company of the Georgian 32nd Light Infantry Battalion is conducting a Cordon and Search Operation in Spinchai. Maybe. It’s been an hour since the first MRAPS (Mine-Resistant Ambush Protected vehicles) came into view, churning up dust on the edges of town, and obvious confusion is slowing them down. If there was meant to be an element of surprise, that’s been lost and the villagers are nervous, agitated and watchful.

Intel says that insurgents in Spinchai are harboring large caches of money and weapons, used to finance and supply the Taliban. The local Afghan elder is thought to be friendly, but he’s carefully navigating the influence of tribal and insurgent pressures. The Georgians want to meet with him, develop a relationship, and see what he has to say. The mission is clear, and the goal is to avoid kinetics.

A firefight in this scenario means failure. Gunfire in Spinchai could damage relations in every other village in the area of operations. The Georgians are here to make friends, to build working partnerships, to find and seize guns and money meant for the Taliban. It isn’t hearts-and-minds, exactly, but something far more practical.

But Charlie Company can’t seem to step off, and the pressure is mounting. The villagers down on the bad end of town, where the Panda sits on the fence, are visibly hostile. Things go from bad to worse when locals compromise a concealed Georgian over-watch position on the northern side of town. More villagers fill the street.

A dismounted patrol finally makes it to the edge of Spinchai, and is quickly enveloped by an irate crowd. The Georgians push them back. The villagers press in again, shaking their fists. There is some shoving and a lot of shouting. The Afghan police, played by cadets from the Hungarian Defense Force, are shifty and noncommittal.

The Georgians don’t know it, but they are within 10 feet of a sizeable cache of RPGs and Kalashnikovs concealed in a pit and covered with trash. They also don’t know that a white van, parked on the street nearby, is full of Taliban money.

When calm is finally restored, the Georgians, along with their U.S. Marine liaisons, patrol into the middle of town. Shopkeepers approach with uneasy smiles and try to sell them food and wares. Nobody trusts anybody.

Shura in the village of Spinchai, photo by the author

Suddenly, the money van starts driving away. The Georgians attempt to stop it, but seem hesitant. The van lurches forward. The Georgians shout and wave their arms and brandish rifles but the driver is determined. Rather than be run over, the Georgian soldiers fall away, and the van roars off, past the panda and out of town. Radios erupt with traffic but nobody on the outer cordon stops it either, and the van disappears.

The Georgians and U.S. Marines are invited to a Shura with the village elder. He takes them into his home and serves tea and speaks forth on local issues. The Georgians press for specifics. They want to know who is who in the zoo. The elder gives them a few names and tribal affiliations, but he’s clearly holding back.

They are still talking in slow, frustrating circles, their tea getting cold, when the village outside erupts. Insurgents have attacked the cordon, and that’s when the real guano opera begins.

The attack has taken the Georgians off of their playbook, and the friction is immediate and paralyzing. Nobody seems to know which element is being attacked, or from which direction. Effective communication grinds to a hard stop. Fire-team sized elements are dashing back and forth between buildings and running into each other going opposite directions. Sporadic AK fire is interrupted by long, distinctive bursts from PKM machine guns. Local police are following their own ideas. The villagers have disappeared.

This goes on much too long, and at one point, with an insurgent finally located and isolated on a rooftop, a Hungarian cadet makes a long, unsupported, and agonizing run for glory to the front door of the occupied building. If the bullets had been real he would not have made it. Not even close.

In the end, the Georgians prevail in the firefight, though they’ve taken casualties, let the money drive off, and failed to locate the weapons cache.

The mission debrief is a scorcher, the lessons learned severe. 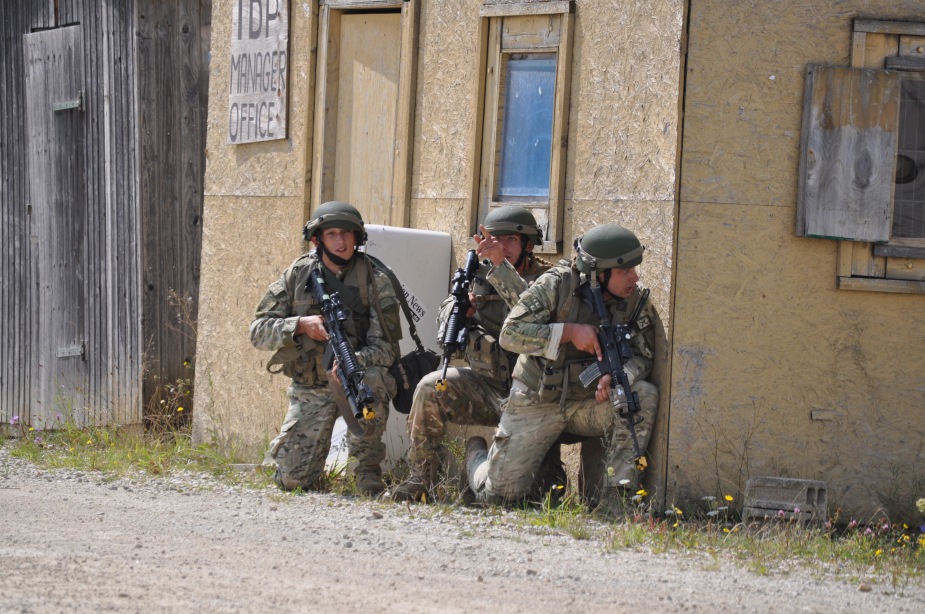 Georgian Soldiers take cover during a firefight, photo by the author

But here is the good news: This is precisely the place to make mistakes. It is the reason JMRC exists. The training here is designed to be difficult, to replicate as nearly as possible the conditions and tactics encountered downrange, to challenge fighting units and their leaders with the unknown and the unknowable, and to encourage and elicit errors at every level of command and execution.

Of equal importance, it is designed to build a mindset that examines and learns from those mistakes, so that when these brothers-in-arms land in Afghanistan – where the bullets and blood aren’t blanks and moulage – the hard and sometimes embarrassing lessons acquired in fictional villages like Spinchai may very well keep them alive.