Gunnery Sergeant Gallup, in no mood, coordinating a Medevac, photo by author

This piece originally appeared in The Nugget News, August 30, 2016.

Hohenfels, Germany:  One of my companions for the evening was U.S. Marine Gunnery Sergeant Robert Gallup.

Gallup, 32, was wounded in the second battle of Fallujah in 2004, scene of the bloodiest fighting in the Iraq War, where 82 Americans were killed, and some 600 wounded. We were at a beer garden on the garrison at Hohenfels, where Marines, Georgians, and Hungarians were celebrating completion of their final exercise, drinking beer, taking selfies, eating schnitzel, and cutting loose after six months of non-stop training.

On his day in Fallujah, GySgt Gallup – then a Corporal – was one of 36 Marines stacked inside of an Amphibious Assault Vehicle. An AAV weighs 29 tons. It was never designed for urban fighting, and on its best day usually carries less than half that number of Marines. In perfect conditions, it is a miserable place.

“We were standing on each other’s shoulders,” Gallup said. “It was hard to breathe.”

His close friend Brian was sitting next to him. Gallup recalls the track stopping suddenly, and word passing that they were going to drop the ramp. They were already in the fight, Gallup said, could hear the guns outside. Gallup looked at Brian and asked if he was ready. Brian was.

And then the world exploded. Gallup suspects it was an RPG, though 12 years later he still isn’t sure.

“It just went black,” he said.

Gallup’s finger had been severed. He still had it though, because he was wearing gloves. It was only later, when he tried to grab his rifle and get out of the track, that he began to think something was wrong.

“It was actually pretty quiet inside,” Gallup told me. “Nobody was yelling for their mothers or any of that movie stuff.”

Inside the track, Marines were entangled in an impossible knot of weapons, gear, bodies, smoke, and darkness.

Gunny Gallup on the move, photo by author

And somewhere in all of that quiet confusion Gallup heard Brian calmly asking, “Has anybody seen my arm?”

Gallup was evacuated to Landstuhl, Germany. He arrived still wearing his bloody uniform, though they had taken his blouse somewhere along the way. He remembers it was freezing outside, and as they got on a bus someone handed each of them a quilt, handmade, and donated for the purpose.

A month later Gallup was back home in Georgia, convalescing, and taking care of his mother, who had been diagnosed with ALS. One afternoon Gallup took up his quilt and saw again the phone number sewn into it by the maker. He decided to call, to say thank you, to share the quilt’s story and maybe some of his own, so that whoever had crafted it would know that it actually had made a difference in someone’s life.

Evacuating a wounded Hungarian.  US Marines, and Georgian soldiers carry a comrade out of the line of fire.

The phone rang too many times and Gallup was about to hang up when an elderly man finally answered. The man listened quietly and said he’d been following the news, watching the battle unfold on television. He asked Gallup about himself, how Marines could fight in all that gear and equipment, about the heat, about Iraq, about the Marine Corps.

Gallup kept expecting the man to hand the phone off to his wife. And then the old gentleman said, shyly, almost demurely, “I hope you don’t think I’m a pussy for making quilts. I was at Iwo Jima.”

There, in the reverie of the beer garden, it got a little dusty for the Gunny and me. But we pulled it together. Gunny lit a cigarette. He took a long drag.

“When he told me that,” Gallup said, holding his palm out over the ground at about the height of a three-year-old, the scars on his hand pronounced and almost glowing in the fluorescent light, “I felt about this big.”

And so it circles back, that brotherhood, the reverence and respect that reaches through veterans from different ages and binds them together against time. There would be other meetings, Gallup told me, in the next few years, with veterans of the Chosin Reservoir in Korea, Hue City in Vietnam, and he’s felt the same way every time.

What’s true enough is that Gunnery Sergeant Gallup has earned his rightful place among those who sacrificed for each other in hallowed fights, though he doesn’t feel like it, and has a very hard time seeing himself in their company. 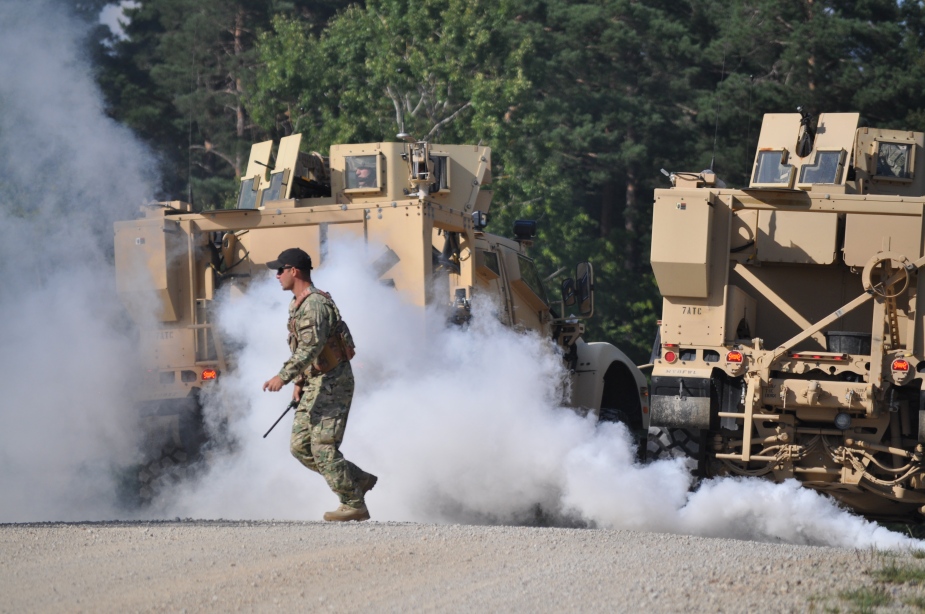 I asked him if he was staying in the Corps for the long haul, and he laughed. We were at the back of the beer garden, in the corner, the organ grind of continuous training melting away by the pint. Gunny was watching closely. Marines were starting to break things and it was getting louder.

Gunnery Sergeant Gallup and his team of U.S. Marines will deploy in October to Afghanistan, with the 32nd Georgian Light Infantry Battalion, for the Resolute Support Mission ordered by the President of the United States.