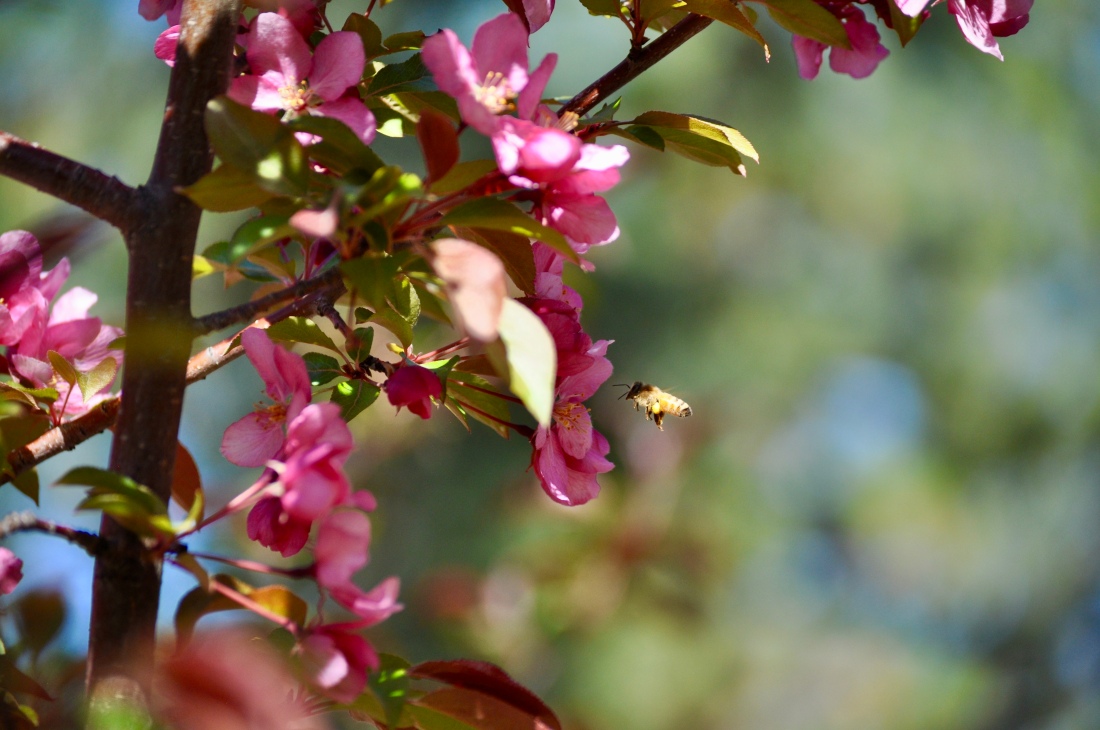 Historians and archeologists tell us that human beings began collecting wild honey about 10,000 years ago. Evidence shows up in ancient North African pottery, Egyptian art, and honey in jars has been recovered from the tombs of the Pharaohs.  By 600 BCE the Picts of ancient Scotland – naturally it was the Scots – were brewing honey-ale, or mead, a legacy which comes down to us even in poetry such as the epic of Beowulf, which means bee-wolf, or bear.

But bees are not just a luxury because they make honey.  They are necessity.  They are required for an almond to set, for example, and the work they do is vital for any number of other crops we rely on but rarely think about when we tuck in for a meal. Bees are an engine for the success of many other species of life, and a bell-weather for the health of our planet.

Bee Tea.  A 60/40 Mixture of sugar and water, steeped in chamomile, with a dash of sea salt gives the bees a jumpstart after arriving on the Figure 8.

So, here on the Figure 8, we’ve decided to try our hand at beekeeping.  I’ve been attending the Tumalo Bee Academy, reading widely, talking to experienced beekeepers, and last Saturday we picked up our first nucleus colony of bees and brought them home.

The basic building block of a beehive is the “super,” where the frames are stored.  It’s possible to buy the supers and frames already assembled, but I wanted to build them myself because, like most things worthy of our attention, the more I invest myself in the intricacies of the hive, and the life of bees, the bigger the reward has become.

I placed our hive in a clearing in the ponderosas that dominate the Figure 8, on the remnants of the old Deer Ridge Road where Gary Tewalt and other Sister’s aboriginals once hunted deer as young men – and set up the box facing south-east, where the bees would be primed to enjoy full sun year round.

When I opened the nuc I was, momentarily, amazed by the sheer number of bees inside.  No one really counts the bees, but best estimates put the numbers for a nucleus colony at about 10 thousand bees:  one queen, mostly workers, and a smattering of drones whose only glorious function in this world is to mate with virgin queens.

Of course he dies a Shakespearean death in the process, his abdomen ripped open, but his purpose on earth is fulfilled in the act.

The bees had come from Medford in the middle of the night and were, thankfully, in a good mood when I brought them home.  I can admit to feeling somewhat ridiculous in a full bee-suit, and glad some of my less-repressed friends weren’t around to provide a running commentary, but in the suit I was able to handle and examine the frames — and watch the bees at work — without worrying about getting zapped on my first full day of keeping bees.

By lunchtime we had the bees installed, fed, and apparently happy in their new home.  We stood watching them – utterly mesmerized — as they began to fly, precisely marking their new location by some miracle of evolutionary GPS – a bee can fly up to 8 miles in one direction looking for forage — and by early afternoon the first bees had found their way into our yard and were scrambling around on the flowering dandelions.

I feel a tremendous responsibility for our bees.  There is some miracle in them, some fascinating glimpse into industry without guile – only steady purpose and a commitment to the things of life.

I would be dishonest if I didn’t admit to harboring dreams of honey, but this first year honey can only be a bonus — my focus is entirely on nurturing a strong colony that builds up its own sufficient stores to survive a Sisters winter into next spring.

In the evening, as the light was drawing out of the sky, I went back to the hive and sat beside it for a long time.  The vigorous comings and goings of midday, when we saw the first bees returning with bright pollen on their legs, were easing off as the last bees flew home in staggered waves.  They came out of the forest in buzzing and random bunches, like formations of B-17s scattered after a mission over Europe, and disappeared into the hive.

It was truly a singular and transcendent experience, enough to inspire me to take a slow walk around our place with fresh eyes, as if I had never seen any of it before, and to stand beside the apple trees appreciating in some new way the marvel and promise of their bright pink and red blossoms.

I stood in our little orchard for a long time then, until a single cold drop of rain hit my thumb.  And then I looked up into the clouds, watching the tall tops of the ponderosas brush against the disorganized sky, and I thought of Robinson Jeffers, the wild bard of Point Sur, who watched the world closely and in awe and who implored us all to remember:  “It is only a little planet, but how beautiful it is.”